Agile and certifications, is this a good match?  Usually agile supporters are proud to not be certified.

I don’t know, but at least several founders of Scrum seem to think it is. You have 2 big Scrum certification organisations:

What is the difference between the 2 organisations?  Well, I’m not involved in either of them, so I only know what I found out on the internet.  Time for some gossip: Scrum Alliance started first around 2002, but by 2009 Ken Schwaber had become extreme dissatisfied in it: the organisation he helped create was more interested in and dependant on the money coming in than in the mission.  So he founded Scrum.org. A longer description of this history is available (albeit a bit hidden) on the Scrum.org website.

The certifications of the Scrum Alliance do seem to go further. Especially the Scrum Coach and Trainer are not easy.  It is not just taking an exam, but demonstrate over 1500 hours of Scrum coaching with real client references.  So if you see a Certified Scrum Coach, you know that the customers were indeed satisfied with the word delivered. These certifications however are beyond my experience at the moment, so let’s focus on the Certified Scrum Master and Professional Scrum Master.

What is the difference between these certificates? Well, again, I only took the Professional Scrum Master assessment, so I know absolutely nothing about the Certified Scrum Master certificate.  However, I do know that it is possible to take the PSM assessment without having to follow a training, while this isn’t the case for the CSM. So that was one of my reasons for taking PSM I.  That both Ken Schwaber and Jeff Sutherland are involved in Scrum.org seems to be another plus.

So, how to prepare for the assessment?

Then the assessment itself, is it difficult?

Not so much, I scored 95%. If you know Scrum and understand it, achieving the required 85% should be quite easy to do. I needed 25 minutes to go through all 80 questions. So that left me plenty of time to go back to the bookmarked questions.  Some needed indeed some adjustment, but in the end I could finish easily in time.

So, does this prove I am now a good Scrum Master?

Likewise, this certificate does prove that I know Scrum. And perhaps also that I can apply it. Doing this on a real project, with real people/organizational/time issues and constraints, that’s the next challenge!

As a tester you’ll often need to generate test data.  A lot can be achieved with Microsoft Excel or Open/LibreOffice Calc or any other spreadsheet. However there are tools specialized in generating test data.

Several commercial tools focus at generating big data, like those of Grid-Tools, Tricentis and probably several others. Since I haven’t used these, I’m not going to discuss them.

There are also several smaller, free tools that you can use!

In my opinion these are indispensable tools for any serious tester.  Add them to your bookmarks and start using them.

Lego has always been of big interest to me. From my first Lego City kits to my Mindstorms 1st generation kit, they were again and again very interesting to build and play with. Recently during our (almost) daily walk at work, we had a discussion on Lego and my colleague put it nicely: “with Lego you first and foremost build and then play, with PlayMobil you can only play”.

So I’m very happy that my son also has a keen interest in Lego. He creates the strangest cars, boats and airplanes, but it is very nice that a 7 year old isn’t hampered by any ideas how these things exactly should look like. He already has saved for and bought quite a few Lego City kits, especially those with trucks.  And the Lego folders are always within reach to select new kits.  Soon he will have a birthday party, which brings in extra cash, so he wants to select new kits.  So we had to look for the new folder, August – December 2014.  And Lego has upped the ante with it: they’ve included 3D functionality!

Words and pictures don’t do this justice, so look at the following clip (it’s from a Dutch shop, and the only one I could find on the Internet)

Lego seems to be very well in touch with new media and (perhaps by extension?) very succesful. Lego made a very nice movie about the early Lego history. You have to admit that the founder of Lego, Ole Kirk Christiansen, didn’t give up when hit by bad luck.

You can make a boring company video with the standard stuff in it. Lego chose to make an animated video, this of course appeals much more to the audience of Lego (children of 6 to 16). But also for adults, it is an interesting film.

From 1993 onwards sales slumped and although Lego tried to increase sales by increasing the number of sets and tried to innovate outside of the standard bricks, by 2003 the company was virtually out of cash. By cutting costs and focussing on the essence of Lego, Lego is now again a succesful company.
This history is described in a book “Brick by Brick: How LEGO Reinvented Its Innovation System and Conquered the Toy Industry” 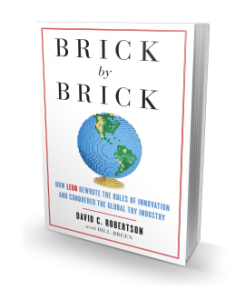 Several summaries are online: a brief one and a longer one or a comic version (with Lego people of course)

Now, many people say that Lego is becoming more expensive, but this does not seem to be the case. There is a well researched blog post on this matter, you can find it here.
The average price of a Lego set seems to have been quite steady since the 1990s:

Update: just in, a new look at the price of bricks in a set on Wired. You’ll get the most bang for your buck with the Trevi Fountain (21020) set.

Back to new media. Who hasn’t seen the new Lego Movie?

And with an 8.0 IMDB score it also is quite a good movie. Next to that, the Lego videogames also get quite good Metacritic scores. You can’t go wrong with a Lego Batman, Hobbit or Star Wars game. for smartphones or tablets are also numerous free or paid games available, both for Apple as for Android.

So I think we can conclude that Lego really is up to date with the digital media!
Don’t wait any longer and grab your old Lego kits and start building something.